Okay something a little different, going back in time.  One of the other games I have been playing over the last several years is SAGA by Studio Tomahawk.  Its a historical skirmish game where each army has a battle board with abilities you can activate.  You roll dice with symbols on them and place the die on the appropriate abilities you want to activate that turn.  Its a fun game easy to learn hard to master.  Its a scenario driven game played in about 6-7 turns.  I present the Moors. 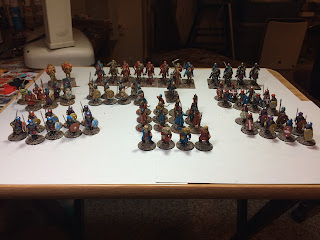 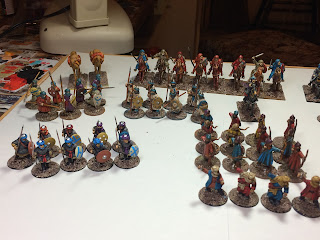 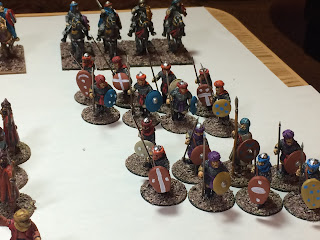 My current project is to create a 3000pt + Sisters of Battle army for Epic Armageddon.  This will be my third army for Epic after Emperors Children and Eldar. 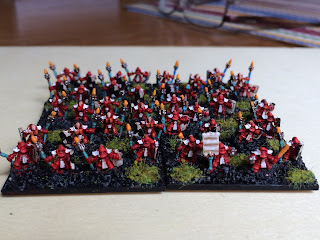 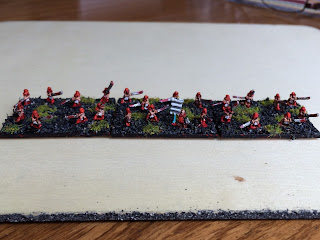 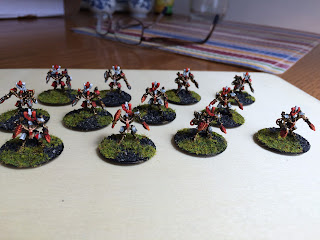 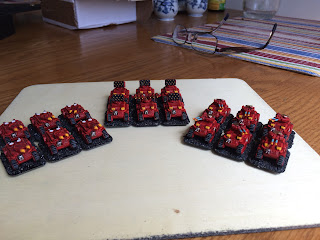 First game with the Sisters and what match up not to have, the immovable imperial fists.  With bunkers and trenches providing protection they would be hard to dislodge plus being space marines the 2 BM was going to be tough.

Objectives:  IF blitz was surrounded by a bunker, his second and third objective were on my half close to my blitz forming a triangle.
The sisters objectives were placed on the far left and center right.

My plan after set up was to take the right bunker using the Chapels, Exorcists, Pentinence Engines and eventually the Repentia Sisters.  I figured it should not take to much to dislodge them since the Chapel attacks are ignore cover and so are the pentinence engines.  On the left bunker the immolators, pentinence and repressors would remove the marines from their protective cover.  The plan was to advance as quick as possible.  Like most plans it went horribly wrong.

The imperial fists won the first turn and put their flyers on CAP.  I doubled my Chapels (their range of 30cm for weapons pretty much sucks), that gave them -1 to hit.  Their barrages and IC shots did one damage and killed one stand (lets say the -1 hurt because I missed many of my shots by 1 (propose increase the range of their weapons).  The Centurion on the right fired at the chapel and did a damage point.   I failed to activate my Redemptionist, he moved his tactical squad forward and shot at the Chapels.  I advanced the Exorcists and they fired at the bunker squad in the right killed a stand and more blast markers. The bunker squad on the right fired at the pentinence engine in the woods and did real good, they broke.  I finally sent in my flyers to attack the tactical squad with rhinos and failed to hit. (story of this game).  On my left things were just as bad.  The repressors failed to activate ( I tried faithful).  The battle sister advanced to some building in the center unloading and firing at the tactical squad with rhinos on the right and failed to hit anything. Some vindicators got close to the battle sisters and fired their shots but no damage.  I doubled my pentinence on the left hoping to draw out overwatch fire they didn’t.  The whirlwinds in the center bunker near the blitz sustained fired on the battle sisters in the buildings but did no damage.  On the left I advanced my immolators they shot down on overwatch and broke.  On the right the squad in the bunkers fired at the chapels and destroyed one and they broke.  The repentance sisters doubled so they could charge next turn. So after turn one I had several broken units and no units that really got far.  Failing to move on some critical rolls.  Most units broken units rallied but they are right back where they were when they started the battle.

Turn two IF wont the initiative.  They started by blasting the pentinence engines on the left with the bunker marines and breaking them.  They retained and shot up the repentia sisters on the right but not breaking them.  I assaulted with the repentia sisters and they lost (note don’t attack cowards in bunkers because they hide like little babies).  The sisters retained and sent the repressors forward on the left to damage the bunker marines no kills (bad rolling continues), they got blasted by the fell blade and were destroyed.  I sent in the flyers and they took out two whirlwinds on the right.  My Exorcist failed to activate.  My Chapel which rallied also failed to activate.  The sisters in the center assaulted the vindicators which moved close last turn, the Sisters won and destroyed the vindicators.  This turn so no progress also stuck with more broken units, half strength units and no way to get objectives.

Post-Game Analysis:
This game was to test out unit interaction and get a feel for the army.  I chose the units based on their abilities and what I had in my collection at the moment.  Since I have never played the sisters I wanted to get as many different units as possible.

What can I say.  The game did not go as I had hoped.  Some terrible rolls to hit and a bunch of failed activations really stymied me the whole game.  So when I did have a chance to move, most of the time it was to double so I could shoot my weapons.  The chapel is a prime example of a WE with potential yet, it needs to double early and probably often to find targets in range.  The first turn it had to double just to shoot the inferno cannon, it also had to double in turn three to target some centurions.  On the left flank the repressors and immolotars had to double just to fire their weapons.  The penitent engines did nothing the whole game besides get shot up and broke.  Most of their targets were out of range early and they would need to double to do anything.  The Repentia sisters did okay once in combat but they were already at half strength.  The exorcist did a nice job of taking out some tanks and the hunter is necessary for some AA support.  The lighting strike are cool for taking out tanks also.  I had a lot of AT shots at long range.  This battle probably was not the best to gauge the Sisters but it did give me some ideas of what I want to try next time.  More seraphims, retributors, imperial troops with valkryies.  Definitely keep the penitent engines and chapel drop either immolotars or repressors, keep Redemptionists.

Overall:  More long-range firepower increase chapels to 45cm range, increase penitent engines movement to 20cm, add options to increase unit size of sisters, Retributors by 2 units.
Maybe a special garrison rule for them where they can set up a single formation 30cm instead of 15.  Things to keep in mind but the next list and game will be different, maybe get a better gauge of the army 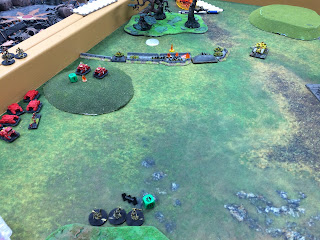 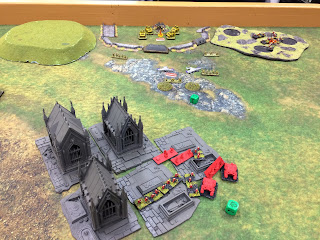 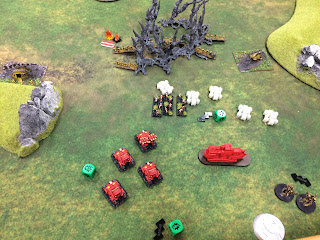 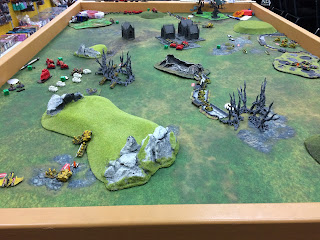 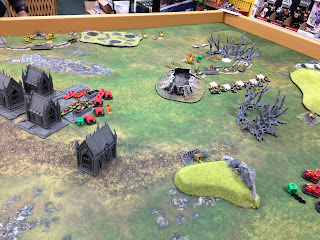 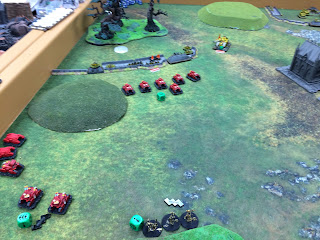 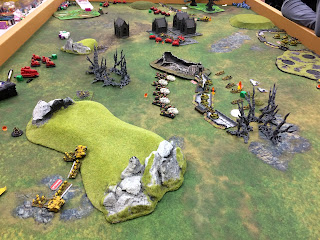 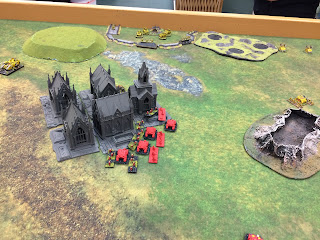 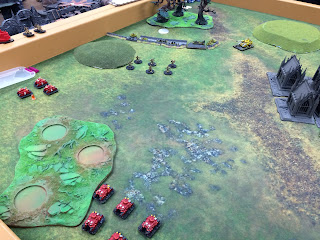 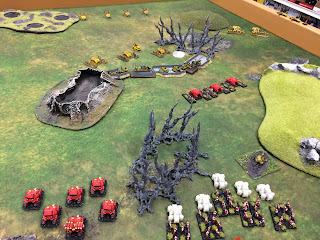 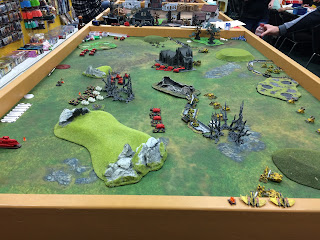 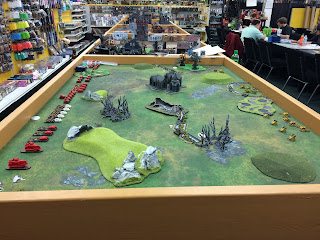