Well 2018 is just about done and what an interesting year it was.  I really had no gaming goal for 2018 but to continue painting miniatures I had collected over the years and prevent myself from buying more knowing I would never get caught up (it never works out that way).

Epic:
I collected in 2017 my Sisters of Battle army from Onslaught miniatures and started painting them up in 2018.  I also picked up 36 Penitent Engines from Vanguard miniatures because the model is awesome.  I got most of the army painted and still have about 18 penitent engines to build and paint but my sisters army is basically done.  With that completed I probably played close to 20 games with them over the year and had success and not much success. Good army to play and great background information, burn baby burn..disco inferno. 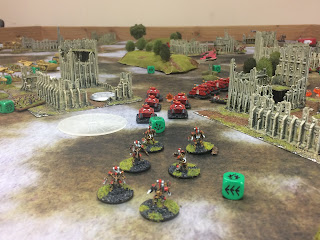 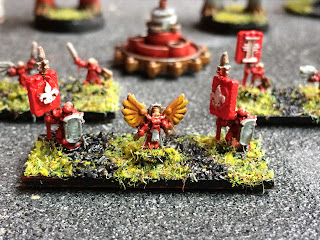 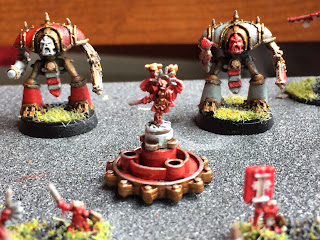 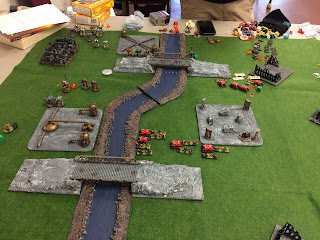 Warmaster:
I caught the bug early in the year and completed my Dark Elves by NEAT in June of this year.  I will probably make one more purchase this year from Trollz for their harpies then my army will be done.  I have played about 8 games with the dark elves and have had limited success, but the more I play the more I get better at the game.  Win or lose who doesn’t love Small Scale Big Wars.  For next year might work on some Empire dudes from Warmonger miniatures and make a Dogs of War army using my existing line.  So more purchases in 2019 for sure. 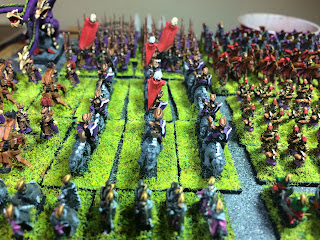 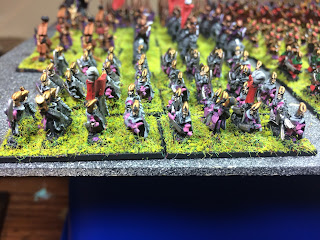 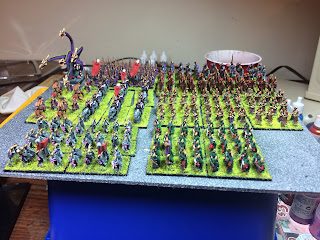 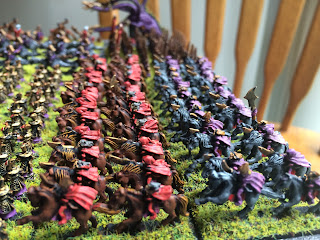 Conan by Monolith:
The kickstarter stuff was sitting in the box for a while and never played.  I decided to get inspired and pulled out units from the main core box set and the kings pledge box set and started painting up units for the game.  The game is easy to learn but hard to master.  Hopefully 2019 will see games being played and more miniatures being played in the Conanverse. 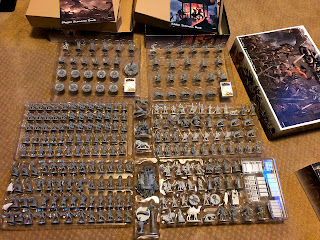 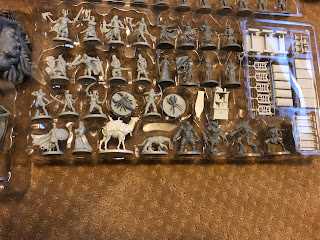 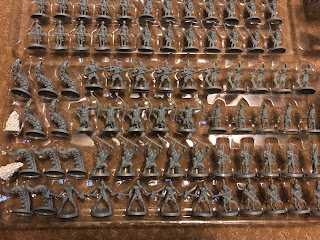 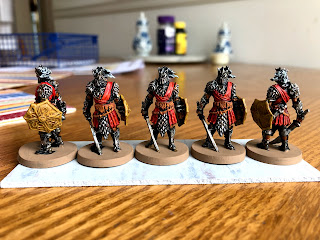 Adeptus Titanicus:
Bought the ruleset and single building set.  Got titans from second hand sources.  Played one game at Fall In this past November.  But no brush has been put to the titans.  This might be the case of me losing interest in the game or don’t feel like painting one miniature for hours.  We will see what happens, maybe to limited colour palettes and be finished.

Throw in the wrench for 2019:
A couple things are coming on the horizon such as DropZone commander version 2.  I love the game but finding players is impossible and only a few conventions run any kind of tournament.  I really don’t need to paint anything for Dropzone, however DropFleet I do have a few dreadnoughts to put together and a space station.  This is another great game, superior to Battlefleet Gothic.

Then we come upon Ancients in 15mm.  I have three armies languishing in boxes all designed to be played using Field of Glory version 3 rules.  I have attempted ADLG, single dice outcome and find it boring, not really complete and just basically a version of DBMM or DBMA or whatever other DB* name they come up with.  So the goal is maybe to play a few games here and there, teach someone the game.  Nothing that will take up time from Epic and Warmaster.

So the ultimate 2019 gaming goal is:
-       to complete my Warmaster Dark Elve army with the new additions of harpies.
-       Finish up my Sisters of battle army, I have lightning strikes to finish up painting, find some decent Chapel engines paint them up and find some cool objective markers.
-       Try to get through all the Conan models in Core box, Kings Pledge, Kitai and Stygian box sets and purchase the Nordheim expansion and get those models painted.
-       Complete Warhounds(6), reavers(2) and Warlord(2) titans for Adeptus Titanicus.
-       Purchase DropZone commander 2 and play the game, maybe do more demo of Dropzone.
-       Get a few games in of Field of Glory.
-       AVOID kickstarter candy(you know the cool game that will never be played and sits on a shelf gathering dust)
-       Sell off my 40k TAU army
-       Purchase and paint more 6mm-10mm terrain (castles, leven miniatures, boneshop titan fortress)
-       Try out one of the four rules set(Navarchus, Poseidons Warriors, Naumachiae, Bireme and Galley) I have for ancient naval warfare.  I have lots of 1/300 scale Xyston models painted and based ready for battle
-       Try to do some commission work