2019 is only ten days old and so far I have made progress on some armies.  The miniatures were painted in 2018 and completed in 2019.  We have a single Dark Elf Spearman unit from Onslaught miniatures for Warmaster.  It’s a lovely sculpt and simple to paint.  I used Vallejo Red and Vallejo Jade, then washed with Army Painter Mid Tone.  Very simple colour scheme and stands out on the table.  I am waiting for some harpies to fly in from overseas and thinking the jade colour for them might work.  I will know once there in my grubby hands.  Also got to start thinking about the Pikeman, halbediers, Gunners, Pistoliers for my Dogs of War army for Warmaster.  Always good to have two armies so you can demo and change up if you get bored with one army. 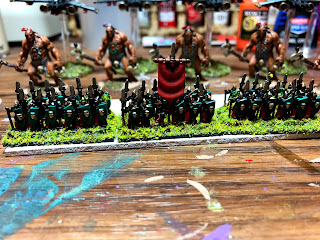 We then have some resin Lightning Strikes for my Sisters of Battle Epic Army.  Got these models from a source and they are nice casts.  I primed black and used Celestial Gray for the wings, Retributor Gold for the engines, wing tips and Vallejo red for the missles.  Very simple but striking (no pun intended).  That completes my air support for my Sisters Army.  Still looking for models to use as Chapels(ie smaller War Engines for the Sisters list).  The Sisters army is coming along good and still have 18 Penitent Engines to complete from Vanguard Miniatures. 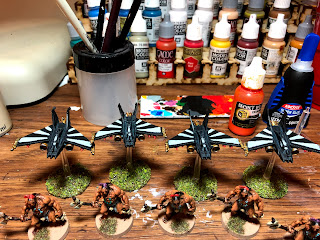 The larger figures are Pict Warriors for the Conan by Monolith board game.  I decided to start painting up those models as a change of pace from the 6mm/10mm I have been painting for the last several years.  I still have over a 100 more Conan miniatures to paint but concentrating on units to make progress and only doing the Core and King Sets first.  The Picts were primed brown, then washed and highlighted with various browns from Vallejo and GW. I think they came out okay. 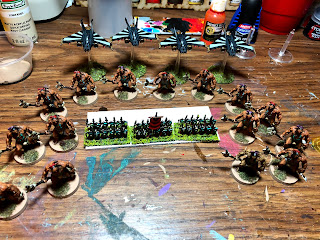 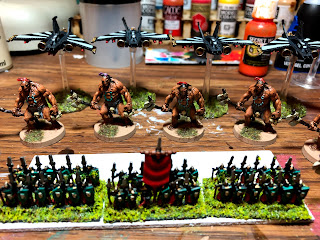 Besides all this I am working on a Scenario for the Epic Tournament at Fall In, also waiting to receive some 10mm Samurai.  May pick up the resin Novan Transport from Vanguard Miniatures, looks like a thunderhawk and a nice sculpt.  His stuff is really nicely cast and reasonably priced.