NEAT XI is finally over and what a great time it was.  Not sure if it was the cold drugs I was on or the allergy nose spray sending off good vibes but I had a good overall weekend playing games and being social.  Five games of Epic and one game of Warmaster made for a great weekend of gaming.  Thanks to NEAT organizer Dave for running the event and the Time Machine in Manchester Connecticut for hosting.  This year there were lots of prizes for everyone and I snagged a gift certificate from Onslaught Miniatures (ie more Sisters are being recruited to hunt down the heretics and eradicate them with flame and misery).

There were four down from PA and two from NJ and 3 of those attended their first NEAT and I must say they will most certainly be back next year (well one of them has the trophy so they need to come back with it and defend it).

This year I took my Sisters of Battle (version 1.2).  I got to play 5 games over three days and played against Imperial Fists, 2 x Cadian, Speed Freaks, Orks.  The Sisters did okay against each of their opponents who were skilled and have been playing for a while, basically no easy match.  I’ll present some highlights of each match from the Saturday tournament and roughly how the units did in the game and what worked and didn’t work.  I’ll have some pictures also of each battle from Saturday.  Though more tournament pictures can be found here:

Game 1 vs Imperial Fists:
This was an unusual game in that IF were dug in and did not move much and I had to advance to get into range to get the enemy out of the bunkers and take some objectives.  I should have played more aggressive early in the game but some failed activations on Penitent engines and aircraft hindered a lot of that.  The highlight of the game was the beat down of two Fellblades in two separate assaults in turn 2.  One Fellblade went down to the Penitent Engines in CC (they must have heard the buzz saws).  The other was a fire fight with the Retributors and support from Immolators.  This cleared the biggest hurdles for me.  The other thing is I forgot Marines are 2BM suppression during my initial shots from aircraft.  After the Fellblades went down my AT shots were limited to targets, it became a matter of pressing the units to contest and capture objectives.  I was too spread out to maneuver and failed initiatives checks for my other penitent engine meant they were doing nothing the whole battle.  The low point of the game was the Knights getting beat by Scouts and support units in a firefight (very embarrassing).  In the end it was a 1-0 win due to time running out.  I got T&H 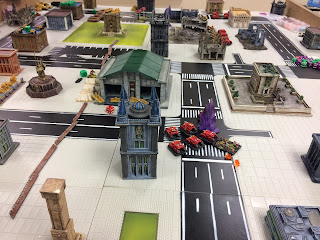 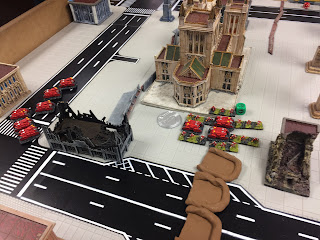 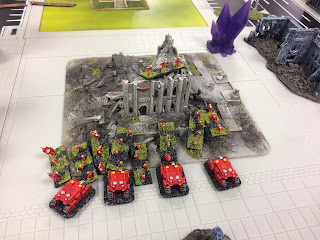 Game 2 vs. Cadians
Saturdays game was the second game against Cadians.  I played Friday night against the same opponent and was more reserved in my strategy as was he since we didn’t know much about each other’s army.  On Saturday when we got matched I knew I had to be more aggressive and make him react to my moves.  This game was more about making counter moves and never allowing the other to really let their battle plan play out.  We both jockeyed for position.  He was aggressive with his Leviathan, 2xStorm ?(troop transport) and 2xValkryies while his artillery sat on the baseline shelling out barrages.

I attacked my right flank with 2x Penitent engines and immolators and the left flank with 2x retributors and knights.  Normally its turn three that I teleport my Seraphim but in order to be aggressive and disrupt his baseline engines and contest Blitz objectives (manticores, death strikes, hydra) I teleported in turn 2 to start CC with the units.  This worked out well and he reacted by bringing some Valkyries over to lend a hand.  I sent in my one unit of flyers to take out the AA (again to be aggressive).  I managed to break one hydra unit.  The Death Strikes were able to take out 2 knights.  The highlight of the game was my turn three assault on his leviathan with troops inside by Repentia sisters and Immolotars along with support from three other units (knights, 2xretributors).  The leviathan crumbled from damage and the troops inside were destroyed through CC resolution.  This gave me BTS but he had T&H.  The game ended in a 1-1 tie due to time.

Penitent Engines survived the whole game and were targeted a lot but did their work.
Repentia Sisters with their extra attack MW is nasty, love them.
Knights good deterrent did some damage, not sold on them yet. 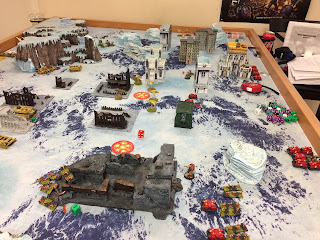 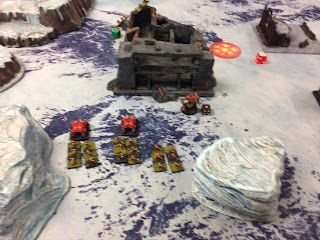 Game 3 vs. Speed Freaks
I don’t like playing against Orks just too many of them and speed freaks are fast.  This game was unusual in that both of us had to advance and double to fight.  Orks needed to double to get a bonus to their initiative and Sisters needed to advance to get into the fight.  The game was fun and tense.  Orks move forward I shoot them, there was no need to move too far and I would let the orks come to me and try to lure them into Firefights.  My right flank was weak and got run over by end of turn two and by turn three my BTS got eliminated.  I was able to take my left flank and move to the center units.  Turn three I was able to assault his big Ork formation (BTS) I used Repentia, 2x Retributors, Penitent and Knight Legions to wipe out his BTS, however the orks had the right flanks and two objectives on my half.  Most of the second half of turn 2 and beginning of turn three I must have failed like 4 activations in a row.  We called the game due to time Orks won 2-1 (BTS and T&H vs. BTS).

Poor planning and poor dice rolls contributed to the loss.
Repentia and Retributors as support is a nasty combo. 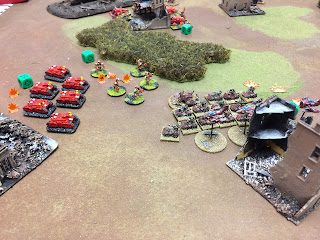 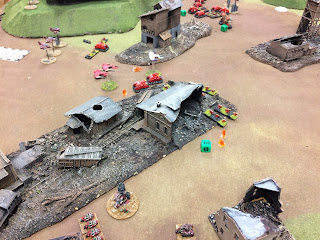 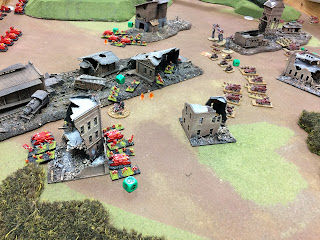 Overall the tournament was fun and getting to use the Sisters of Battle for five games over the weekend really allowed me to see the benefits.

Combined assaults are nasty especially with Retributors as support and Repentia or Penitents as the main assault.  They should be able to wipe out large formations with ease.
Penitent Engines awesome as garrisons, attract a lot of fire and attention and fulfill multiple purposes of extracting infantry from cover and assault AV/WE as needed. (rinse and repeat)
Repentia sisters with Immolators is so nasty, soften up with MW fire than assault next turn.  Should make someone think twice about messing with your Sister(s).