No Update in a quite a while...lockdown update

Well its been a while that's for sure.  Lockdown allowed me to catch up on painting of miniatures for games I hardly get to play plus start some new armies for existing systems I play.
So the last 10 weeks or so consisted of Warmaster, Conan (boardgames), Dropfleet Commander.  Plus I was able to setup a table at home and get familiar with DropFleet and was able to get the family to play Conan (at least one game).

First part of lockdown was getting the Conan miniatures painted.  I completed many of them over time but had the Characters and another tray to do.  My plan is to complete both box sets, the main game box and the kings pledge box.  I would start with rank and file dudes as they allow me to finish quickly in production line style.  The characters would take longer due to uniqueness. 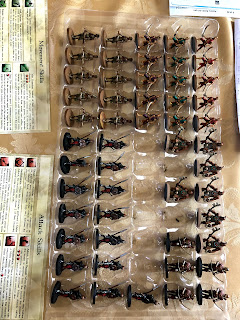 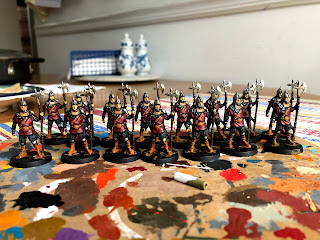 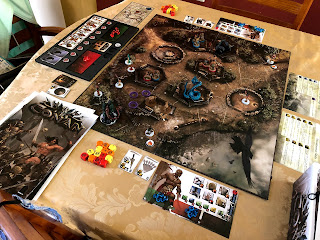 After that I took a break from 25mm and went to 10mm.  I decided to paint up some pikeman and cannons for a Dogs of War army for Warmaster.  The figures were from warmonger-miniatures part of their landkenschents line.  With Warmaster its about 3-4 paint colours on a unit with a nice base to make the whole unit pop.  I used contrast red and blue for the pike and they came out nice.  I have a lot more miniatures from warmonger but wanted to take a break. 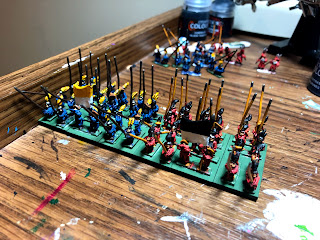 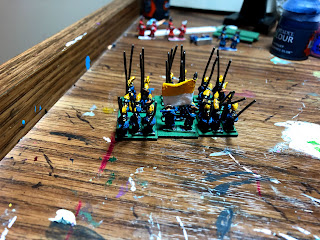 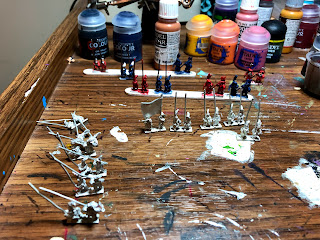 Next up was finishing off the UCM for Dropfleet Commander.  I painted the Scourge about 4 year ago and had the UCM sitting around, primed Grey.  I took them out and went with yellow for the ships to make them stand out and picked out areas in metal and red colours. Simple yet striking, makes the fleet seem as one. 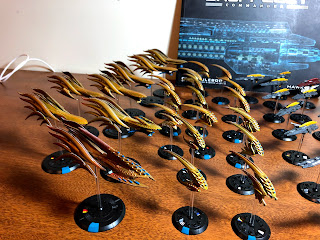 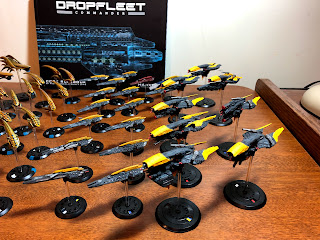 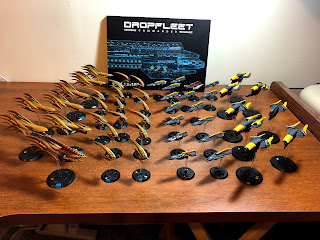